The 8 Main Benefits of VoIP Communication

VoIP or Voice Over Internet Protocol seems to have taken the means of communicating with one another to an entirely new level.

Being the center of quite the few controversies as well as rapidly establishing itself as one of the most popular ways of communicating between two parties that reside in different countries, it comes as to no surprise that there is so much dust stirred around it!

To start off, let’s get over the fundamentals before embarking on the more complex nitty-gritties.

The question here is “Why VoIP is Important”?

VoIP allows you to get over the usual hassle of tedious paperwork and outdated wires that could break in an instant and catapults you to the realm of wireless networks and modern technology.

This allows you to make calls to all parts of the world provided that you have an internet connection and that’s it.

Best thing of all, any wifi network will work so it’s ideal if you are a frequent traveler or stranded in a foreign country.

Let’s take a look at both sides of the coin and observe where VoIP excels and where it falls short.

The 8 Main Benefits Of VoIP at a Glance

Disregarding the fact of whether you are an individual, a small business or a large company, VoIP seems to be all accustomed to serving the likes of anyone.

To give you a proper example, the only thing a business really needs to get going with VoIP is a strong internet connection.

Truth to be told, it’s even better than all the hassle with traditional phone wires as if the lines get clogged, it can take hours and in rare cases, days before the technical issue is solved.

You be the one to calculate the potential losses from such an unfortunate occurrence.

I’m no cheapskate myself, but once you’ve run a one-thousand-man company you’ll understand that every penny saved might be the thing that will make or break the year.

Besides being able to pay all of the bills in batch and online, without any odious sheets obfuscating your view, you’ll never have to waste precious time in order to complete your monthly fees.

I can’t tell you how many nerves it has saved me, disregarding the potential errors in human judgment that can occur, extending the entire process longer than necessary!

The main reason for VoIP to uphold its competitive prices lays in the simple fact that the companies operating the entities are in a massive clash for customers, leaving extravagant charges out of the game.

These businesses know that customers want a fast, cheap and reliable service and that’s what their triad of aspiring goals looks like, the latter being an abridged version, understandably.

3. No Surcharges Or Additional Bills

If you are residing in the US, you might have not been as affected as some of my colleagues back in Europe.

I gleefully remember listening in on him rambling and grunting about the ludicrous roaming fees associated with making calls outside of the country.

I then introduced him to VoIP.

He has been thankful ever since!

Back in the day, I used to move huge quantities on Amazon and oftentimes, they would leave me an invoice requesting that I fax them some of my larger transactions.

”A fax?” I lamented, ”Where the hell am I going to get myself a fax machine?!”

Only when I switched to VoIP did I realize that I could simply make use of the email account provided with my account and voila, you are now appeasing even the inanest of requests!

5. Upgrade Or Downgrade The Number Of Accounts Instantaneously!

Nothing pissed me off more than having to talk hours upon hours on end with customer ‘care’ whenever I wanted to change the number of accounts owned by me.

I’m paying for it, so I should be the one stirring the freaking boat, don’t you think?

It took me weeks just to get them to comprehend the nature of my requests and as I got increasingly frustrate at their incompetency and the laissez-fair attitude, I simply switched and never looked back again!

Here comes the fun part; With one swell swoop was I able to either add or subtract the number of VOIP accounts in my possession.

Simple and concise, just the way I like it!

6. There’s Room For More Than A Couple To Join The Fray

Imagine the following scenario; You have to set up a meeting with your executive board that consists of twelve members and they are scattered all around the world.

Not only do I have to make twelve separate calls while having to take into account the different time zones and sleeping patterns of the lot, I also have to hope that they will be available once I make the dreaded call.

With a VoIP service, such as Skype, I can simply tell my colleagues and associates that the meeting will be scheduled at 4 PM next Sunday.

Beats catching them by the tail on an individual basis any time of the day.

You can’t even imagine the number of times I’ve had to close in on an important deal, without ever having the opportunity to meet the person and have a tangible handshake with them.

This might not sound as important as it does but believe me, when millions are at stake, you do want to see the face of the potential scoundrel that could ruin you in a heartbeat.

Also, since most of our communication is nonverbal, my body’s natural senses are an additional buffer when I make a decision to accept a proposal.

Did I mention the anonymous sharing of documents within a drop of a hat?

Upload, receive a message, download, how simply can it be?!

8. Import Everything Into One Central Unit

Nobody uses letters as a way of messaging people anymore and that’s why it’s very important to have all the necessities, as in your most valued contacts readily available at your disposal.

This is effortlessly enabled once you go with a VoIP phone system as only one click separates you from the next decisive date in your calendar or the number of a bigwig from an adjacent company.

As a professional businessman, you’ll soon start to appreciate the invaluable of having such an interconnected system in the comforts of your office or home! 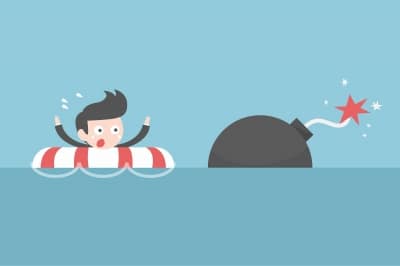 As I often pride myself in the candor of the words outlined in my articles, I have to take a moment out of your time to show you another side of VoIP, the less talked about angle not many are willing to explore.

Despite all the VoIP features and benefits that we had go thru above, there’s always a bad side no matter how.

Without further ado, here are the top three things that VoIP definitely needs to work on!

The Three Main Drawbacks Of A VoIP Phone System

Let’s not sugarcoat things, if you Internet starts flickering around, you are about to lose all the phone lines at once, without any sort of forewarning or premonition.

It will strike you like a sudden bolt from the blue and you won’t be able to do anything about it.

That is, until the systemboots itself online.

Another important thing to note, from personal experience, when I travelled to distant continents or third-world countries, it was increasingly difficult to establish a stable connection with the caller on the other side.

Communication was possible, but it was flaky at best.

No system is foolproof and especially not in the online realm, where you will read daily headlines of yet another website going down or submitting to the various intrusions of malignant hackers.

This goes without saying; Even though the word free seems to attract many flies to the honey, once the bees start stinging, there’s little you can do to save your life or in our case, our most valued information.

Following this, always make sure that the VoIP provider of your choice uses instant message encryption, making it impossible for hackers to breach into the confines of your safe space, as the only thing they would be getting out of it is a mishmash of confusing strings of letters.

In the beginning of this write-up, I’ve talked about the controversial nature of VoIP’s and this would definitely have to be a strong point for such a widespread belief.

The reason for not including such an important number and government numbers at all in that same vein, seem to be largely political.

You see, as governments are losing big bucks on all the users switching to VoIP phone providers, so do the regulations the big brass impose on private companies increase.

This sort of discrepancy between the two only adds fire to the fuel and the only one suffering seems to be the end user.

Find out more about the regulation here about VoIP and 911 service.

All in all, VoIP’s have too much going for them to simply toss them into the bin for a couple of misdemeanors.

I can envision a future where VoIP’s will completely overshadow the POTS (Plain Old Telephone System), with a foolproof system in place that is going to deal with the issues outlined in the article!

Especially when the VoIP or Virtual Pbx can provide a more effective business for you.